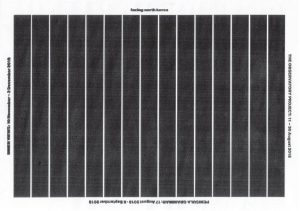 As Jacques Lacan suggests in his psychoanalytic theory, the “gaze” focuses around the relation between what views and what is viewed.

And this gaze enables special experiences in which something unconscious in the human psyche views an object while it makes itself visible, through specific methods, experiences, and perspectives.
The interaction in which attention is drawn to a subject, i.e. the gaze, is a kind of approach that enables viewing the border through the three exhibitions of Facing North Korea, which intend to open perspectives that enable subjective observations and inner reflections through the gaze rather than passive views represented by the media.

Since before Korea was divided into North and South Koreas, it has often been called by its geographical name, the Korean Peninsula.
As suggested by the Latin etymology of “peninsula” that incorporates the meanings of “almost” and “island,” it means a land whose national border is surrounded mostly by water and is connected with its mainland.

Due to the geographical characteristic that the Korean Peninsula is located at the boundary between mainland and sea, such a concept has been variously utilized and articulated through Japanese colonialism and the division between North and South Koreas. The Korean Peninsula has assumed different roles over time: it was a field for oppositions between capitalism and communism during the Cold War, but now is becoming the buffer zone between China, which is gaining more power politically and economically, and the United States which is concerned with defense of the Pacific region.
This exhibition titled “Peninsula Grammar” intends to escape from the ideological and external views on North and South Koreas and focuses on the topographical perspectives towards the Korean Peninsula in 2018.

The research team consisting of six members headed by Kyung Jin Zoh, professor of the Graduate School of Environmental Studies, Seoul National University, discovers a hidden landscape by taking the observatories in the DMZ—which have been installed since the late 1970s—as the objects of gaze and visiting the fifteen observatories as the vestigial landscape of the Cold War.
Particularly here, they demonstrate archived works structured like a language which is based on researching and analyzing observatories as borders in an architectural sense. In this way, they intend to discuss the conflicts carried by the observatories, which are not simple tourist spots but the mediators standing upon the fault line between two different lands. Also, it is to discuss interpretations on the landscape and topography proper to the land.
French artist Laure Catugier gazes upon the socio-structural systems through architectural and urban works from her own perspective. In this work, she demonstrates a minimal and strict sense of tension between contrast and harmony by using architectural stones as objects that can help easily to build or remove the walls, as well as steel as a contrary material for figurative decorations.
Performance artists Sumi Jang, Hyung-Min Kim, and Jee-Ae Lim deal delicately with limited movements of their own bodies and a limited language of sound. Paying attention to the various influences of topographical conditions, limiting or extending, on the human body, they perform about the body within the physically given border as well as the physical border that can be overcome only using the eyes. They discover their own distances by gazing upon each other within the invisible and visible borders.