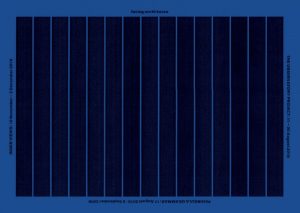 According to the psychological theory of Jacques Lacan, the “gaze” implies focusing around the relation between what views and what is viewed.

The perspective provided by the gaze can be gained only through specific methods, experiences, and positions. This activity of focusing on temporal duration contains the process in which something unconscious in the human psyche views an object while the “something” is viewed by the object the other way around.

Standing upon the observatory of the Demilitarized Zone (DMZ) between North and South Koreas the landscape of which has grown to date within the 248 km long and 4 km wide boundary, one cannot shun away from the question, “What has humankind gazed upon during the time of division?”

The DMZ is located at an especially meaningful position which has liminal character that not only provides open views but also enables hiding in a refuge, existing between diametrically characterized spaces in geological and topographical senses.

The gaze occurring in this space is not simply to serve the purpose of defense or observation by looking out from a building. Rather, it serves as a subpoena on the observer’s inner subject and engages with it upon the objectified area which has become separate due to specifically conditioned opinions and political reasons. At the observation point where this gaze occurs, it is possible to imagine a new landscape.

The activity of gaze is an important aesthetic attitude applied to the three new exhibitions of Facing North Korea, which intends to escape from the monotonous and conventional views of media on North Korea and instead look forward to a new perspective opened by the observer’s subjective gaze.

“The Observatory Project” deals with the DMZ, the border between North and South Koreas which has for more than sixty-five years been a shelter for nature but an isolated space for humankind.

At the DMZ border, fifteen of the observatories which have been built since the 1970s are now in service for the purpose of security-themed tourism. Originally, the observatories were built to serve the purpose of military defense, so tall as to enable easy and far-reaching observation. Lexically, they are often defined as buildings to observe celestial bodies, climate, and the like, just as they are utilized in astronomy, climatology, meteorology, geophysics, and oceanography. In recent days, their concept has extended to the space where one can view landscape in a leisurely manner.

According to the geographer Jay Appleton’s prospect-refuge theory, humankind instinctively desires a circumstance which has both a prospect to observe the climate or place with potential elements of threat and refuge where one can hide oneself safely. The DMZ observatory space has a liminal character that enables both the open prospect and the safe refuge, with traces of military tension in between the culturally and topographically different qualities of spaces.

The research team consisting of six members headed by Kyung Jin Zoh, professor of the Graduate School of Environmental Studies, Seoul National University, discovers a hidden landscape by taking the observatories in the DMZ—which have been installed since the late 1970s—as the objects of gaze and visiting the fifteen observatories as the vestigial landscape of the Cold War. Also, their multilateral investigations on observatories as buildings generated in the border of division are exhibited here as archived works based on documentation materials and environmental analyses.

In the work named “Personal Experiences,” artist Biho Ryu gazes upon the DMZ, recognizing it as an unrealistic, surrealistic, and larger-than-life psychological space. In this work, the artist is demonstrating the mental state of anxiety derived from the DMZ through videos and installations.

Photographer Jaebum Kim observes the flow of capital in the natural landscape and suggests the scenes of the city and the park viewed from Greenwich Park which includes the Royal Observatory, the institution that has taken the locations of longitude latticing the globe as measurement baselines. The artist’s research originating from “Time for Navy,” a small exhibition venue at an observatory built in 1675 as the first standard of time measurement and navigation, becomes reinterpreted with the eyes of observing the landscape of the Lehman Brothers and London’s financial district around it. The Royal Greenwich Observatory, which was initially used for naval operation, enables one to see at a glance the topography of cities and states created by a historical determination through the borders in which the negatives and the positives are separated in contrast. The green laser installed to represent the prime meridian as the standard longitude catches sight from our reality in the exhibition space, drawing the endless border of desire. At the same time, the artist narrates the story of time contaminated politically and at geopolitical borders.

Taiyoh Mori draws the lines of defining relations between the self and things, ceaselessly in the working process. Strictly vertical repetitions enable the artist to project the ego and things into space, thus deriving contingent gazes from observers.

Sound artist Klaas Hübner poses the endless questions on essence by drawing the moving traces of circles, and this regular movement of traces is evidenced by sound. The repetitive traces of circles are the borders superposed at a number of invisible territories, while each sound filling the space extends the duration of gaze.