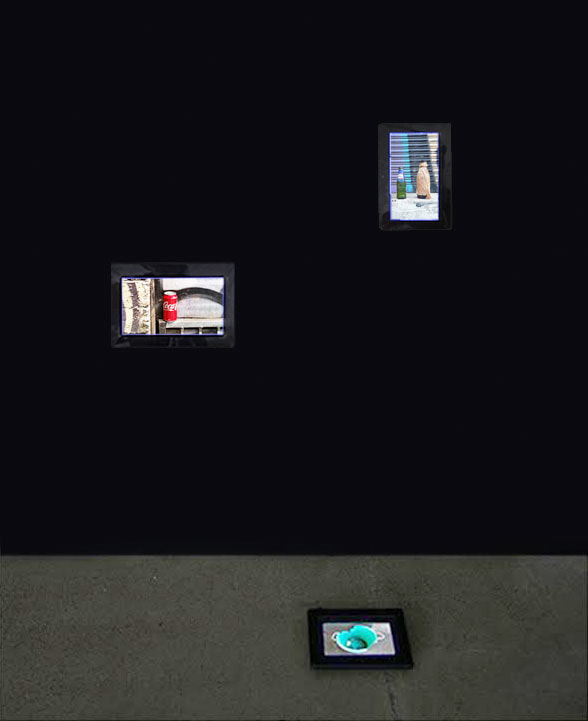 This is a curatorial project by Australian artist John R. Neeson that presents a collection of images of objects discarded in the street by anonymous participants in the life of the city.
Neeson habitually records these ‘found’ arrangements on a smart phone and frames them as socio-political signifiers within the context of the ‘readymade’ and ‘the still life’. The networking capability of the digital device enables this repositioning to take place within the broad egalitarian, transitory, socio-cultural dialogue of Instagram.
For the project the images are displayed on small digital screens that share the simulacrum of reality that characterises social networking, while their placement within the architecture of the installation corresponds with the unconventional points of image capture enabled by the compact phone/camera.
Each image is displayed for a longer time than scrolling usually permits which enables more sustained scrutiny. This can reveal that discarded objects are often deliberately composed which can provoke speculation upon the narrative of their placement. The images record the objects as artefacts and evidence of events and interactions within the contemporary urban environments.

Since 1993 John R Neeson has completed 47 venue specific and referential projects in Australia, the US and Europe including Melbourne Readymade Still Life Poster Project 1&2, 2017: Glasshouse Wall , Melbourne, 2016: Berlin Project, Institut fur alles Mogliche, 2015: Brooklyn Project, PointB,New York, 2014: Fugitive Light & Northern Light, AC Institute, New York,2008. He was represented at the Oslo Flanneur Festival, 2016 and his solo project The Urban Bodegon was installed at AC Institute, New York, 2014. ‘House – A work in Process’ is his ongoing collaborative project with New York based composer Joeph di Ponio, presented at Avalon Island, Orlando, Florida in 2015 and PontB studios New York, 2014. He has a PhD and an MA from Monash University and completed a Post Graduate Programme at The Royal College of Art, London.