This Is Not Music @ TOP Space, Schillerpalais 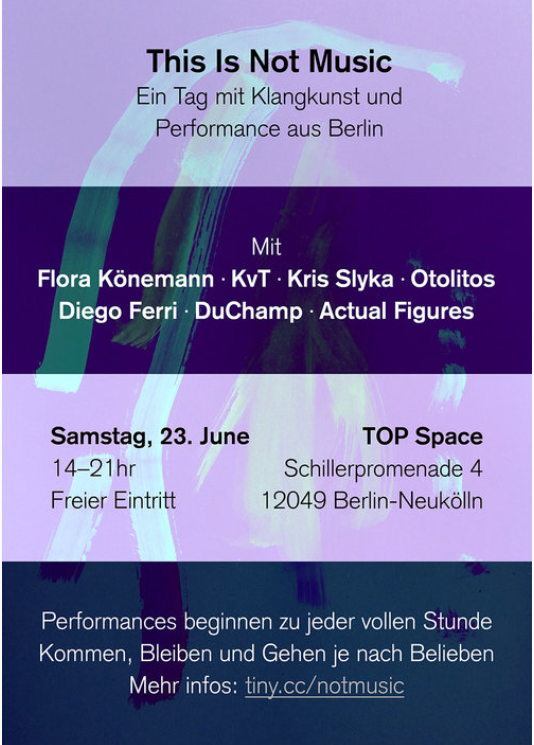 Flora Könemann (soundexplorations, piezoelectrics & performative experiments). Performance: weaving rotations // folded noise (from series: loudspeaker shamanism) with electroacoustic sound with speakers and bodies in space, is part of my on-going exploration of (inner) movement, rotation, relation and sound. While studying the technique of textile weaving, I came across an interesting relation of the anatomy of my right shoulder blade, listening, breath, texture and rhythmic white noise. This performance is an invitation to meet your personal space of inner listening. http://www.there-is-something-wrong-with-the-view.net

Kris Slyka is an experimental visual artist, musician and maker who explores the intersection of digital and analogue technologies. Through a time-lapse video covering a single day in 2009 accompanied by sounds sampled from recordings made over the following years, their performance will combine the themes of freedom, identity, anxiety, depression, love, and loss. https://amplifoxed.com/

Otolitos is improv minimalist amplified sound by Tristen, Tom and Angie. One guy called us ‘post-noise’. The laziest soft noise band in central Europe – we perform with drums/bass/noisebox/loopstation/projections/voice. Email us and we will come and play in your basement. http://www.otolitos.com/

Diego Ferri is a producer and musician working with tape loops and low-resolution digital samples. Accompanied by video projection from Tristen Bakker, a musician and documentarian. https://grifasi.bandcamp.com/track/decay-absential-2

DUCHAMP is an Italian scientist, musician and curator based in Berlin, religiously devoted to drone. http://www.duchampdrone.tumblr.com

The Actual Figures bring together inner and outer worlds through hypnotic video imagery and sounds in a live performance. Their shows have hidden themes running throughout and if you’re not careful you just might learn something. If you’re reckless, you might find yourself dancing. http://www.actualfigures.com

Curator Tristen Bakker is a Documentarian and Editor based in Berlin. A graduate of the York University Film and Video Program, she then channeled her creative energies into the film residency – Editor’s Lab – at the Canadian Film Centre in Toronto, Canada. (…) Since arriving in Berlin in 2010, she participated in the Berlinale Talent Campus. Currently Tristen is creating various documentary and music based videos and is doing reviews, interviews, photos and video documentation of musicians and music events. She has completed two short experimental documentaries Tempelhof and Vexations and a portrait documentary Adrian. She is currently editing for the European documentary magazine Modern Times Review. She is also developing an aural and written documentary project based on interviews called Birth Stories.    https://tristenbakker.com